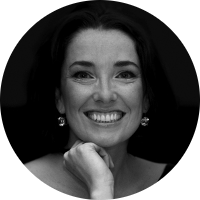 Victoria Christian is the eldest daughter of British designer Clive Christian and her love of perfume began at an early age, when she and her father discovered an original 1800’s bottle from the Crown Perfumery that had been crowned by Queen Victoria in 1872 in the floorboards of the family manor house in England. The bottle was identical to those that were used by the aristocracy during the 1800’s. Victoria studied ballet and performing arts in Covent Garden, London and performed on the West End Stages in Musical Theatre for five years until her father discovered that the Crown Perfumery was going out of business and he decided to take the reins and create a new level of luxury perfume. Without a second thought Victoria joined the company to be close to the world of perfumes that she was so passionate about.

After a training period with the perfumes in London, Paris and Grasse with many perfumers Victoria joined Clive in launching the Original Collection in London at Fortnum & Mason in 1999.

Today Victoria travels worldwide as Brand Ambassador for Clive Christian and is very proud to represent the perfumes that her father created.

As many children do, I used to empty my mother’s perfumes down the plug hole to create empty vessels for my ‘home made perfume’. This consisted of chopping off her prize roses and stuffing them in with a little water and plenty of wishes hoping to create the perfect scent…of course this never happened but I was intrigued and officially hooked!
I can say that I was equally in love with the perfume as with the bottle – however the two loves never really seemed to meet…I found that I had lots of beautiful bottles that I just had to have but the juice didn’t live up to my imagination or expectation. I had lots of perfumes that I couldn’t leave the house without and yet the bottles were nothing special to me. Safe to say that I had a large collection!

My first career was in the theatre – I studied ballet and performing arts in Covent Garden and then was fortunate enough to tread the boards on the West End Stages of London in Musical Theatre.
When I interviewed to join the company the only position available to me was as a ‘spritzer’ on the shop floor – which of course I took with both hands! Over the next three years I worked full time at Fortnum & Mason in London and then at Bergdorf Goodman in New York – where I actually met Ali from Basenotes and took part in the first ever Sniffapalooza at BG!

Looking back on my time at the perfume counter it really was the best introduction to the world of perfumes – this is where you come face to face with your client – men and women who are simply looking to fall in love with a perfume – and in turn I became intimately involved in each of the six perfumes in our collection – understanding the nuances year on year of the different ingredients, familiarizing myself with the way the perfumes unravelled and revealed themselves on different skin tones. I absolutely loved my time on the floor with OUR customers.
I worked out that I spritzed and introduced approximately 30,000 people during my time on the counters – and had the privilege to see many women skip out of the store with a bottle of 1872 or feel two inches taller instantly with a drop of No.1…although my favourite moment was when Goldie Hawn came into the perfumery at Bergdorfs dressed head to toe in white and pointed directly at the Clive Christian Perfume counter – “there it is – ‘X’ by Clive!” – and then came over and spritzed herself completely with the tester bottle and then bought one for herself! For me she is the epitome of X for Women – eternally youthful, sensual, feminine and a little naughty! Later that year she returned with Kurt Russell and they bought a bottle of X for each other on Valentine’s Day – a perfect match!