“Centrepoint is extremely grateful to be the official charity of The Luxury Law Summit. Simply putting a roof over a homeless young person’s head is not enough to give them a future, but it would be impossible to provide the vital additional help needed without the generosity of people like you and events like this one”

At least 136,000 young people approach local councils in England and Wales each year because of homelessness, a situation they face alone and often through no fault of their own. Some of the most vulnerable homeless young people have received Centrepoint’s support since 1969.

From the basement of St Anne’s Church in Soho, where the charity was founded, Centrepoint has grown to support homeless young people in hostels across London, Sunderland and Bradford and, through a network of partner charities, young people throughout the UK. Providing a safe place to stay is as vital as ever, but is just the start of the charity’s work.

The basement of St Anne’s is still used by Centrepoint today,not as hostel, but the hub for its health and well-being work. Lady Kitty visited earlier this year, meeting some of the health professionals employed by Centrepoint, who provide counselling; advice on drugs and sexual health, and teach young people to cook healthily on a tight budget. They are part of a team of Centrepoint staff put in place around each young person because the impact of homelessness is not only devastating, but complex too. Often a young person’s education has also been heavily disrupted, jeopardising their chances of finding work and leaving them vulnerable to debt. Staff agree a plan with young people to help them achieve the two things they need most to leave homelessness behind, a job and an independent home.

Even with support, making that journey can be incredibly difficult for someone who may have been forced to leave a violent family home, come to the UK as an unaccompanied refugee or been left adrift after leaving care. Often it takes time and lots of small steps. 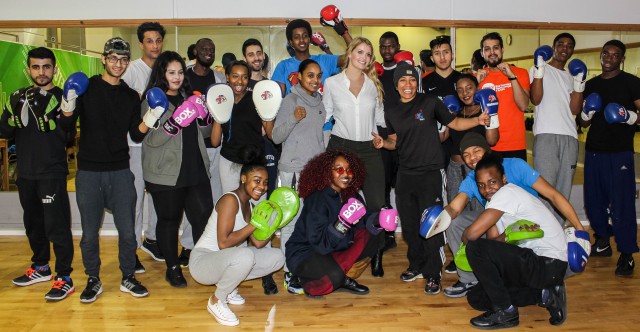 Centrepoint use its programmes like Sport For Change, which sees former elite athletes provided by The Dame Kelly Holmes Trust run activity sessions ranging from swimming to sumo wrestling, to help rebuild young people’s confidence. Lady Kitty recently donned a pair of boxing gloves to join a session, meeting two young women who are now on the road to finding full-time employment.

Get involved
If you would like the opportunity to see the impact of the charity’s work first-hand and to be invited to attend a calendar of events like Centrepoint at the Palace, please consider joining The Centrepoint Circle, a group of donors determined to help end youth homelessness.

For further information about the Centrepoint Circle please contact: