The judges said:  “In the world of luxury fashion and accessories, there are very few designers who have made such a significant and resounding impact as French shoe designer Christian Louboutin. The brand launched in Paris in 1991 and his 20th anniversary was celebrated by the London Design Museum with an exhibition of his work including the iconic red sole. Along the way Christian was declared the most prestigious brand for women for 3 consecutive years by the Luxury Brand Status Index. Last year saw the launch of Christian Louboutin Beauté, including the highly acclaimed Nudes, Pops and Noirs nail polish in bottles with the 6 inch lid.”
Legal Lifetime Achievement, sponsored by Taylor Wessing.

The judges said: “Barbara Kolsun is General Counsel of Stuart Weitzman, LLC, the luxury shoe design, manufacturing and retail company based in New York, where she started the company’s first in-house legal department. Before that she served as Senior Vice President and General Counsel of Seven For All Mankind LLC, a leading luxury denim and apparel company, and before that Senior Vice President and General Counsel of Kate Spade LLC, the luxury handbag and lifestyle design house. Barbara has devoted significant time and effort to the cause of enforcement of intellectual property, serving as Chairman of the Board of the International Anticounterfeiting Coalition (IACC) and as a member of its Board for many years. She has also spoken and published widely on the topic of counterfeiting and trademark infringement in the United States, Asia, and Europe. Ms. Kolsun co-conceived, co-edited, and co-authored with Guillermo Jimenez “Fashion Law – A Guide for Designers, Fashion Executives, and Attorneys”, the first textbook on Fashion Law. She also teaches and is Professor of Fashion Law at New York University.”
Luxury Entrepreneur 2015, sponsored by Colebrooke Park Spa & Fitness Centre.

The judges said:  “Kathleen is a partner in the corporate department of law firm Arthur Cox and has worked tirelessly over the last few years to promote fashion and design, specifically Irish fashion and design, through a series of Fashion Showcases in London, Dublin and New York. At these events, the most recent of which was just last week in London, the purpose is not just dealing with the catwalk but introducing the designers to potential buyers of their wares as a business development opportunity. The annual fashion event serves as a stepping-stone between designers and potential new clientele. Kathleen Garrett said: “We firmly believe that with a little collaboration there’s a lot that industry can do for itself – by running these events around the individual country’s fashion weeks, we’re aiming to drive greater interest in Irish fashion internationally.”
General Counsel of the Year sponsored by Barack Ferrazzano Kirschbaum & Nagelberg.

The judges said: “Despite being the only lawyer at the company, Michael has put in place a significant number of initiatives since he arrived in 2013 to protect and secure the Abercrombie & Kent brand.  In particular, he has set up from scratch the company’s regulatory compliance structure, established anti-bribery and corruption policies and e-training modules as well as putting in place an annual compliance audit. He has also been involved in a variety of challenging transactions thrown up by the multi-jurisdictional nature of the luxury travel business.”
Law Firm Innovation sponsored by Killik & Co.

The judges said: “The Taylor Wessing Fashion and Luxury Brands group has been responsible for a number of innovations in this sector. Since 2012 the firm has teamed up with the British Fashion Council to provide legal mentoring to upcoming designers. They have also developed an innovative approach to pricing including giving free access to a legal clinic for a legal overview, followed up by blocks of free time and heavily discounted advice on core issues. Taylor Wessing also publish “The Collection” online, a legal guide to the fashion and luxury brands sector.”
Rising Star Young Designer, sponsored by  Greer Burns & Crain.

The judges said: “Giulia Mori is 24 years old but currently drawing for both “Antonella Rossi” and “Lionella” brands in Italy. Giulia’s combination of careful design, the innovative combination of new processes of sewing with historical Florentine hand embroidery and the use of high quality natural materials such as fine muslin, soft linens and silks, cashmere and velvet have resulted in the opening of new markets for the brand in Qatar, Dubai and Russia.”
Designer Innovation, sponsored by Locke Lord.

The judges said: “A graduate of Central Saint Martins, Jasper Garvida has trained with Alexander McQueen and Moshino before setting up his own label.  As Ethologie evolves into it’s 6th season the ethos of the label is very clear. It’s not just about designing and making clothes for women who care about themselves and wish to look their best. Jasper’s unique skill is being able to modernise classic shapes by making them immediately marketable to the professional woman. He recognises the power of womanhood and as he says “the dress is meant only as a complement”.
Rising Star Young Lawyer, sponsored by Eversheds.

The judges said: “Ciara Connaughton was highlighted for her client service skills and legal abilities. She is a dual-qualified (Ireland and England & Wales) solicitor working in the Superyachts team at Hill Dickinson. Based in the firm’s Jermyn Street offices in London’s West End, Ciara specialises in all financing aspects of the superyacht team’s work, assisting on funding arrangements for banks and lenders, ownership structures, registration and management. Her clients include JP Morgan, Citibank and BNP Paribas who praise her legal aptitude and her commitment to client service.” 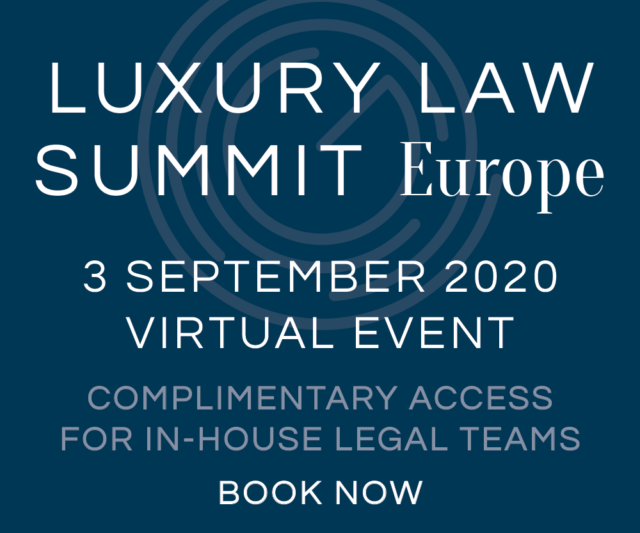